Are you thinking of naming a new build house?

Well look no further for inspiration.  Personalising your home and naming a new build house is relatively easy but do check with your local authority if there are any requirements you need to adhere to.

If your house already has a designated number (most builders will do this) then you must display the number clearly within the boundary of your property.  This doesn't mean that you can't add a name to your number though.  So, if your new build house is number 25 and you want to call your new home, 'The Laurels'  then you would need to display a nameplate similar to the one below. Please note that if your new build home has a name instead of a number then you will need to seek permission from you local council to change it.

Inspiration for names to choose for my new build property:

Naming a new build house, not only personalises your home but carries on an old British custom which began with the gentry naming their Halls, Castles and Manors.  Traditionally, house names would have been based on the family name of the property's owners or be linked to where the property was located.

The majority of historical houses are named after the township in which they were built.  A beautiful example of this is Erddig Hall, a National Trust property located just two miles away from us here at The House Nameplate Company.  Voted as one of the countries finest stately homes, it was built between 1684-1687 for Joshua Edisbury, the High Sheriff of Denbighshire.  His family had bought most of the Erthig (old name for Erddig) estate from the ancient Welsh Erddig family.  Erddig Hall, being built within Erddig Woodland was aptly named.   Not just because of the location though, but because 'Erddig' is welsh for 'a garden' and to this day Errdig Hall has one of the most beautiful gardens and grounds you could wish to visit. 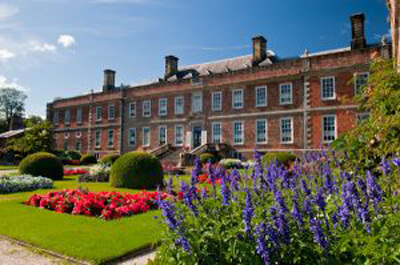 Of course, owners still use their own names and their home's location as inspiration for their homes' new name.  But these can be a lot less formal, with owners choosing to combine their maiden names to create a unique but personal name for their home.  Taking inspiration from the media's recent habit of merging couples' names (think 'Brangelina' and 'Kimye') name blending has become very popular.  Naming your new build house after your very selves doesn't get much more original.  Examples: Similar to this, is to take inspiration from what is around your new build house and the views you have.  Examples: Some people go a step further and name their new build house after a favourite location they have visited or well known beauty spot such as:

Reflecting the ambiance of your home or your personality is also a popular choice for choosing a name for your new build home. Names such as Nirvana, Serenity or even The Madhouse can be a way to give away the atmosphere within your home.

Following on from reflecting your personality, a key way to do this is to choose something witty or funny to call your new build home. Names like Dunroaming or Costa Plenty can show a mischievious side to your nature.

Whatever you decide to call your new build home, we here at The House Nameplate Company are eager to help you show it off in style.